The Castle of Conegliano, with its landmark tower visible from several points of the below flatland, ever since symbol of the identity of the locals and beloved destination of tourists of all ages, dominates the city. It has been monitoring for at least a thousand years the land and its people. Discover more about the history of the town of Conegliano and its Castle.

The Castle of Conegliano, with its landmark tower visible from several points of the below flatland, ever since symbol of the identity of the locals and beloved destination of tourists of all ages, dominates the city. It has been monitoring for at least a thousand years the land and its people.
The towers, surviving the weight of the centuries, the medieval access gates, the walls just now renovated with their ancient magic allure, allow visitors to experience a true historical setting, and to capture its extraordinary environmental beauty.

Right after the Second World War the local authority, aiming at providing a suitable domicile to several relics and memories stored in the town hall, decided to institute the civic museum (1946), recalling a tradition that starting from the Nineteenth century brought to the opening of several museums in the Veneto Region. The collections made of archaeological evidences, frescoes, paintings, coins, weapons, gravestones and tools, documents, prints, maps, and memories of the local celebrity actor Ferruccio Benini, have been enriched by donations and acquisitions over time, thanks also to a specific policy for the widening of the art gallery.

The origins of the Castle of Conegliano 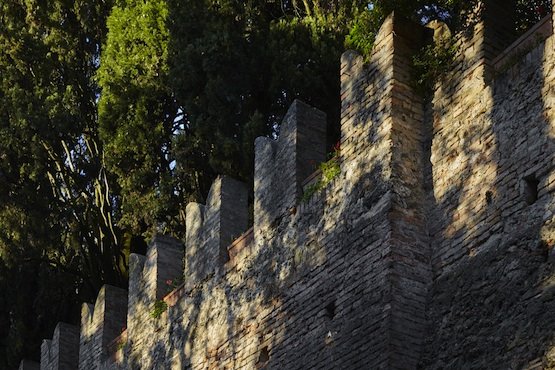 Starting from the XIII century Conegliano has three landmark features. An above fortified nucleus, the village below, and a strong orientation to commerce.

If the castle with its walls and its towers denoted the military character of the originary settlement, Conegliano then became the centre of several commercial activities, of prestigious religious and charity institutions, and, as we have seen, place of transit for those who travelled from the mountains above Belluno to Venice and its port.

History of the Castle of Conegliano

Starting from its foundation in the XI Century, Conegliano featured an innovative type of fortified settlement, common to several towns of the area, such as Bassano and Marostica. A fortified area on the top of the hill, with the below village which spreads along the Monticano river and at the feet of the main hill. 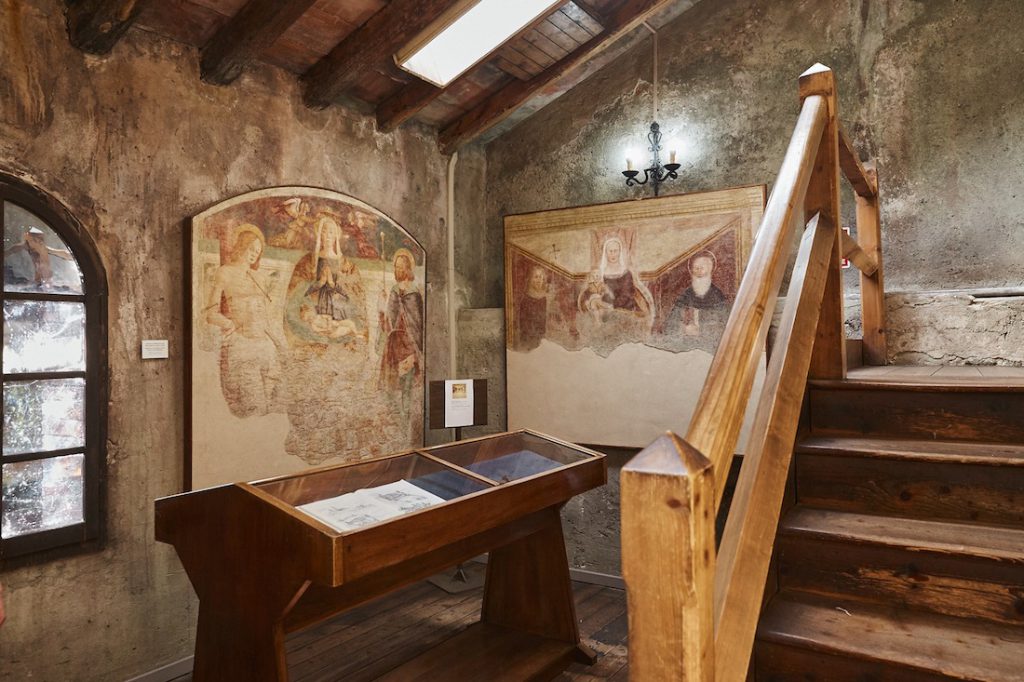 The old Castle used to include a smaller walled area with several towers, also protected by moats. Within this space, starting from the XII Century, we could find the prison, the town hall and the palace of the local authority.

Today only the main tower of the Guard remains, symbol of the Conegliano city and clearly visible from the flatland. Within it, since 1946, the Civic Museum of Conegliano is to be found. In the inside, on several floors, evidences and artworks are stored, coming from the surrounding areas.

Inside of Civic Museum - The archaeological section

The museum houses an archaeological section consisting of prehistoric and Roman remains found in the city and the territory.

There are numerous flint tools, pottery ceramic somewhat fragmented, and food remains attesting to the attendance of the town, from the Neolithic to the Eneolithic (end IV – III millennium BC), by a human group linked culturally to the latest aspects of Culture of mouth jars quadrata.

Ever since 1976 Human presence was known on the hill during the Late Bronze Age (XIV-XIII century BC.). Subsequent discoveries confirmed the settlement on terraces on both sides of the hill by human groups pastoralists, agriculture and the manufacture of ceramics, connectable, for types and decorations, the cultural sub-Apennine facies.

Among the archaeologic findings:
-a mastodon tooth (tertiary education was 65 to 2 million years ago)
– two swords, the Middle Bronze Age (XV century BC.)
– two axes, found in Colfosco always near the river Piave, attributed an ancient Bronze Age (XVIII century BC.) the other of the early Iron Age (VII century BC.).

Inside of Civic Museum - Picture Gallery 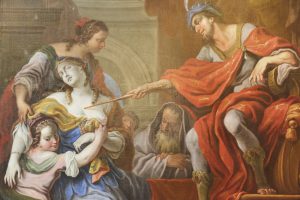 Among the paintings stand out the organ doors depicting the Annunciation, St. John the Baptist and St. Thaddeus, attributed to the workshop of Cima da Conegliano and dated between 1510 and 1517.

The great painting of the Delivery of the Keys to St. Peter (1614/1616) is attributed to Palma the younger.

In the 1987 Maria Teresa Ancillotto Mazzarolli donated 8 paintings of high quality: the penitent Saint Jerome, attributed to Spagnoletto  and the Madonna with Child Jesus, a copy of a famous painting Correggio of 1516, the “Gypsy Girl ‘.

Remarkable the Holy Conversation by Francesco da Milano, Lombard painter very active in the area in the first half of the century. XVI, a portrait of Ambassador Antonio Foscarini (Venetian school, sec. XVI) and that of ‘Admiral Victor Garzoni, painting by Peter the Old century.

Inside of Civic Museum - Frescoes

Among the many works preserved in the Museum, the first that attracts the attention of visitors is probably the fresco from the apse of the church of St. Anthony of the Lateran Canons of Conegliano, now destroyed; work in 1514 by Giovanni Antonio Pordenone, depicts Mary Magdalene, St. Catherine and two other saints paintings, currently on the sides of a Madonna and Child that is different than the text of the invoice of the complex.

There is a series of three paintings from Palu to Fossamerlo: works of the century. XV respectively depict the Madonna Enthroned with Saints, the Crucifixion and the Last Supper; it is almost certainly the work of John of France.

Probably by the same author is the fresco depicting episodes from the life of St. Peter; the apparent “modernism, the artist manifested in clothing of the characters represented, it is contradicted from the general work still influenced by the great masters of the century. XIV who continue to be successful in later centuries even in areas culturally devices. 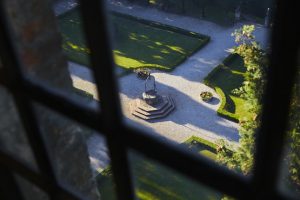 Particularly exciting is the walk inside the gardens, where the romantic atmosphere of the Nineteenth Century can be experienced, with young and majestic cypresses marking the boundary once occupied by the millenary fortress, now reign of the squirrels which entertain visitors, with acrobatic jumps from one tower to another.

From the San Leonardo square, from the top the tower of the Guard, you can see the Alps and the hills where the Prosecco wine is made. This is considered one of the most exciting landscapes in the Veneto region, giving all year long unforgettable emotions and colours. Towards south the flatland opens, marked by the Piave river. The sight here can go until the Venice lagoon, where it is possible to distinguish in some days even the San Marco bell tower.

The Castle is reachable from the city centre even by walking through the ancient Lady of Snows street, an amazing experience in order to appreciate the majestic walls which used to close the west side of the medieval city, when it was a defensive military outpost of the Serenissima Republic.

The walls of Conegliano

Recently restored, along the west side of the Conegliano hills, the walls continue. Here we can find the Zanchi and Bemba towers, along with the other towers which are constituting the defensive apparatus in the west side of the city, embracing and protecting the village below.
And it is actually by descending into the historical centre, through the fascinating walk of the Lady of the Snow street, that the visitor can appreciate in all its majesty the western defence walls, called walls of the Castagnera, featuring powerful arches from the Carrarese epoch (1384-1389), made of bricks sustaining the patrol walk. A last sight recalls the ancient times, when wars and sieges occurred. Descending, visitors can find instead the magnificent palaces of the historical centre of Conegliano.

The texts on the history of the Civic Museum of the Castle and on the interiors are extracted from the project “Conegliano, a city that lives” Council for tourism, Municipality of Conegliano

The other texts are edited by Artestoria

The inside of the Civic Museum in Conegliano